Roy Clements was born in East London in 1946. By a strange coincidence, his birthday falls exactly 25 years after that of John Stott. Until his mid-teenage years he was an avowed atheist with a passion for science. His conversion was a protracted intellectual journey that ended in a manner not dissimilar to that described by C.S Lewis in Surprised by Joy:

You must picture me alone feeling the steady, unrelenting approach of Him whom I so earnestly desired not to meet. That which I greatly feared had at last come upon me: perhaps, that night, the most dejected and reluctant convert in all England. I did not then see what is now the most shining and obvious thing; the Divine humility which will accept a convert even on such terms. The Prodigal Son at least walked home on his own feet. But who can duly adore that Love which will open the high gates to a prodigal who is brought in kicking, struggling, resentful, and darting his eyes in every direction for a chance of escape? The words “compelle intrare,” compel them to come in, have been so abused by wicked men that we shudder at them; but, properly understood, they plumb the depth of the Divine mercy. The hardness of God is kinder than the softness of men, and His compulsion is our liberation. (slightly abbreviated)

Soon after that surrender to ‘the Hound of Heaven’, Roy went up to Nottingham University to read Chemistry. He quickly made his mark in the Christian Union, becoming President in his second year. He graduated with a First in 1967 and gained a government grant for doctoral research in spectroscopy at Imperial College London. It was while he was engaged in that work that he felt God’s call to Christian ministry. In 1970 he attended London Bible College while writing up his thesis, and then joined the staff of the Universities and Colleges Christian Fellowship (then the Inter Varsity Fellowship). In 1974, he accepted an invitation to become Assistant Pastor in Nairobi Baptist Church, Kenya. It was here that he discovered the commitment to expository preaching that became the hallmark of his ministry. In 1979, he returned to the UK to become Pastor at Eden Chapel in Cambridge, a small Baptist church with a burgeoning student ministry that grew rapidly to become a major reformed evangelical hub under his leadership. The sermons and books compiled in this site are almost entirely drawn from the twenty years he served there.

To record that Roy was completely unaware of his homosexuality until the mid-80’s may seem disingenuous to some, but it is true nevertheless. Had he asked the right questions of himself, the evidence was undoubtedly there. But, in his early ministry, Roy unquestioningly accepted the unanimous view of his senior mentors in the evangelical world, namely that homosexuality was a choice not an orientation, a sinful action not a personal identity. He married Jane in 1971 quite oblivious to the emotional risk he was taking; they had three children – Amanda, Jonathan and Toby.

The private dilemma that would eventually terminate his ministry began to unfold when he found himself in love with a male postgraduate in Cambridge. At the outset, neither of them realised they were gay, but both soon realised that there was no other explanation for the intensity of their affection. The friendship lasted less than a year. Roy was adamant that his commitment to his marriage and his ministry could not be compromised, but the loss of his friend was immensely painful. There were no other gay relationships in Roy’s life for the next five years, but he spent that time reflecting deeply on what the Bible had to say about homosexuality. By the early 90’s, he was convinced that most Christians had seriously misunderstood the mind of God on the subject and he was becoming increasingly concerned about the damage which was being done to gay men and women by homophobic prejudice. The issue was, of course, becoming a major source of controversy in the wider church at this time. It became increasingly obvious to him that he would have to ‘come out’ eventually, but he was reluctant to abandon Eden Chapel to a pastorless interregnum. He urged the church to appoint an additional pastor who would take over the reins when he moved on. But it proved extraordinarily difficult to get the church to agree to such an appointment.

Things became more personally challenging with the arrival in Jesus College of a young undergraduate economist. He was struggling as a Christian with his gay feelings and sought Roy’s help as a pastor. They formed a deep friendship that quickly turned to an enduring love.

The crisis broke in 1999. The church had at last found a successor and Roy had indicated that he was resigning from the pastorate to embark on a new academic career as a Christian thinker engaged in the public communication of science. It was during a weekend away that his wife, Jane, asked (for the first time) a direct question about the nature of Roy’s friendship with the young economist. He did not lie – and the confession of his homosexual feelings proved a watershed moment. Jane could not handle the news and insisted on discussing the matter with several trusted advisors, like John Stott and Fred Catherwood. Rumours began to circulate that something was seriously wrong, which led Roy to send a confidential letter to a circle of close friends, explaining why his preaching ministry had come to an end.

It was Roy’s close friendship with a gay man that Jane found impossible to accept. There was an irony in this, because the young economist in question, despairing of an ‘out’ gay partnership with Roy, had broken up with him and begun cohabiting with another man in a village near Cambridge. He refused, however, to abandon Roy completely.

A few weeks after Roy’s fateful confession to Jane, she presented an ultimatum. The nature of the crisis in Roy’s ministry could be ‘hushed up’ with Fred Catherwood’s help under the pretext of his having suffered a nervous breakdown due to overwork. However, there were conditions attached to this subterfuge:

·        he must stay permanently ‘in the closet’, saying nothing further to anyone about his homosexuality

·        he must cease all contact with gay friends, including that special friendship that had triggered the crisis

If these terms were not agreed, then the reasons for his departure from Eden Chapel would be made public and Jane would insist on a separation. Roy made it clear that, in good conscience, he could not accede to these conditions. He offered instead to maintain a total public silence about his homosexuality for a period of two years, during which time he would study for a Master’s degree while Jane and he tried to work out some coping strategy that would save their marriage. It became clear that this proposal was not acceptable when, without further warning, a press-release penned by Fred Catherwood in his capacity as President of the Evangelical Alliance led to photographs and prominent articles in many of the national daily newspapers, including the Times. Reporters from the tabloid press quickly identified the potential for scandal and began to pursue the story.

To staunch the press speculation and minimise the embarrassment to his family and friends, Roy went into hiding. Sadly, no opportunity was ever given to speak to his three children about the circumstances that had led to this abrupt departure. The funding for his planned Master’s and new academic career, which was to have come from a generous Christian trust, was revoked. His main publisher, IVP, ordered his books to be deliberately defaced and withdrawn from bookshops. Friends managed to salvage most of the sermons in the tape library at Eden Chapel before they too were destroyed and they have remained in storage until the construction of this website. Jane and he divorced in 2001. His relationship with his much-loved economist blossomed afresh and they have been living together now for twenty years, becoming civil partners in 2015 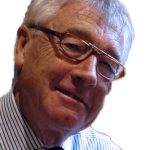 For a full overview of the contents of the sermon archive please click on the link above. The copyright for all the materials on this website is retained by Roy Clements.